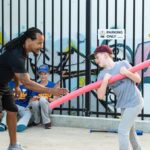 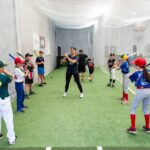 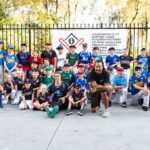 The twelve-time Major League Baseball (MLB) All-Star came out of retirement earlier this year to join the Sydney Bluesox.

RBI Australia owner Matt Redman said it was a once in a lifetime opportunity.

“We don’t have people like Manny come out here often,” he said.

“It was great, we had a massive turn out and it was awesome for the kids.

“Having a player of MLB level coming out to teach kids just doesn’t happen very often – especially not in Australia.

“This is the first time we have held a Sydney Bluesox clinic and I think we are very lucky.”

Redman said children, and parents, were excited to learn from some of the best.

“Rachel is the ultimate professional and she had so much knowledge to give to the kids, and Manny, well he’s been there and done that in the sport so he had some really cool stories to tell,” he said.

“It’s so different for us because we don’t usually get these guys coming to Australia so it’s hard to get access to this kind of teaching.

“For a few of the adults there Manny was a childhood hero, so I think the adults were just as excited as the kids.” 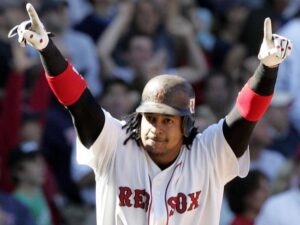 “They discussed the correct way to approach hitting and being athletic with the bat,” Redman said.

“They talked about the correct way to swing the bat using your whole body.

“It was a great class and I think people got a lot out of it.”

Redman said baseball was a great sport for people of all ages.

“It’s non-contact and can be played by anyone of any size,” he said.

“It doesn’t matter how tall or short you are, everyone can give it a go.”

The normal Australian Baseball League season has been delayed due to the ongoing COVID-19 pandemic but Redman said Macarthur’s competition had faired well.

“My business here in Smeaton Grange was shut for three months at the height of the pandemic,” he said.

“The local competition was pushed back by about a month and the ABL season will kick off soon so we will all get to see Manny action.” The partnership will focus on quality coaching across multiple aspects of the game, and not just on field conditioning or competition.

Narellan-based RBI Australia owner and local baseball identity Matt Redman leapt at the opportunity to partner with not only the Academy’s long-seasoned softball program, but also with the Wests Future Stars program, which boast a number of the region’s up and coming baseball athletes.

“RBI Australia has a fully equipped indoor batting and pitching facility in Narellan, which has already proved useful for our softball squad which has moved its training sessions indoors due to the recent wet weather,” Academy sport program manager Daniel Currinckx said.

“It seems only apt that when we first visited RBI to discuss the opportunity to partner with the Academy that it was raining.

“It may have well been a pre-cursor to the start of the program, where the last few weeks would have been washed out, if it wasn’t for RBI”.

The partnership with RBI helps provide the Academy’s 17-strong Softball squad with a specialised indoor training facility, providing two lanes of batting cages, allowing the athletes access to hit or pitch many balls in a relatively short period of time, without having to keep chasing, or running after them on the playing field diamond.”

The ability to train both outside as a team, as well as indoors in specialised positions adds that extra level of professionalism to the program” Currinckx said.

Originally posted in the Wollondilly Advertiser